12 Reasons You Should Marry! 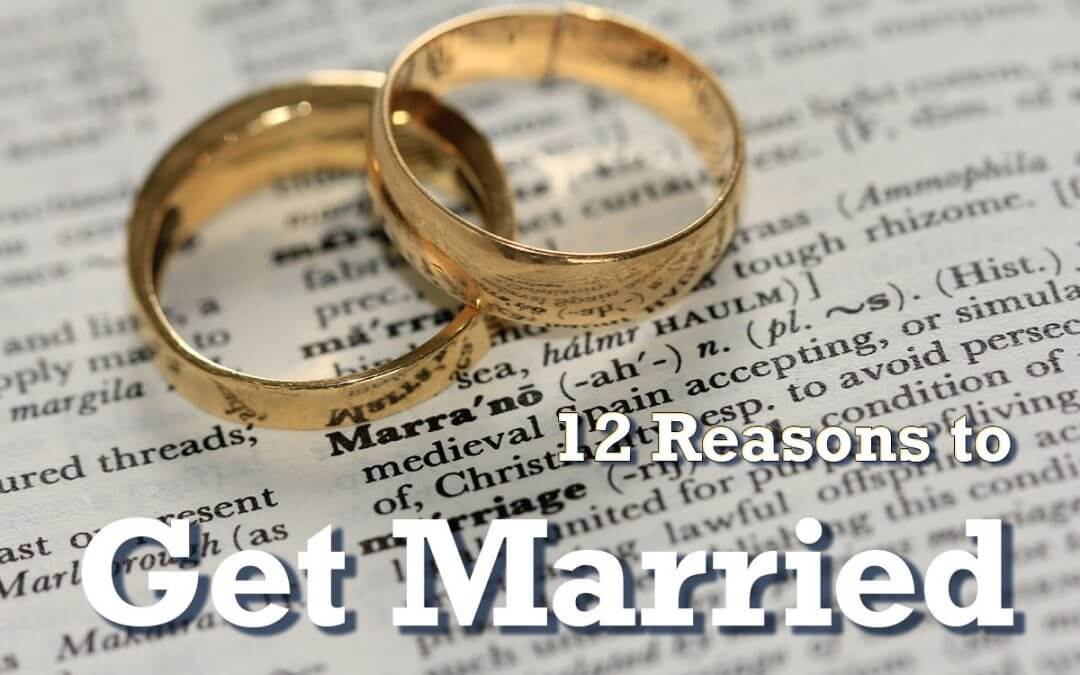 In our series, Thinking of Divorce [series starts here], we explored the issues raised in divorce and the practical consequences for both spouses and children. Divorce is difficult, but breaking up a long-term relationship is hard outside of marriage, too. Many people have children together, buy houses together, make a home together and never get married! Religious, social, or personal beliefs aside, on the merits of marriage, here are twelve practical reasons you should definitely get married!

If you’re not married, then the financial inequities and home roles are not remedied in the event of a break up. What I mean by that is, let’s say one party works outside the home and brings in all the money. This partner buys the house in that person’s name, turns utilities on, buys car insurance, has the cell phone plan, saves for retirement in that person’s name, creates a great credit score because of a balanced debt to income ratio and on time payments, all in that person’s name!

Now let’s say the other person stays home and raises the children, keeps the home-fires burning. That partner has no credit (not good or bad, just nothing!), no income, no insurance. The car that partner drives isn’t even in that person’s name.

Nothing that partner paid for or saved is “joint” and no consideration is given to the contributions of the non-working partner to the household, relationship or child-rearing. The non-working spouse walks away with no financial security and no work history to get a job in the future and regret for the wasted years. Don’t let that be you. Get married. Protect yourself!

You can share health insurance – one premium and one deductible. This saves hundreds of dollars a year instead of each of you having a separate plan. While not as dramatic as reason number one, it is a great reason! Why have two policies, two premiums, two deductibles when you can have one. With the cost of health insurance these days this is a financial no-brainer.

3. The children’s father is legally recognized

If you are not married the father has no legal relationship to the children without a lawsuit being filed. If you’re married, the spouse is considered presumptively to be the father unless proven otherwise. If not married, the male in the home is presumptively considered to be nothing unless proven he is. The non-married father can’t make medical or education decisions; the police wouldn’t recognize him as a parent in an emergency situation. If the mother died, he’d have legal troubles to become the legal parent. Being married solves all these problems.

4. Breakup can be more stressful and costly than divorce

Unmarried couples who are both working and have roughly the same income may not care about evening the inequities described in reason #1. Let’s say you’re both on the deed and mortgage and on the car title and you’re making and saving roughly the same amount of money. If you break up and can’t figure out a solution, you’re considered investment or business partners and must file a civil lawsuit to work out the division of jointly owned property, including houses, cars, and bank accounts.

If you can’t decide on who gets to keep what, it will be sold, usually at a loss, and proceeds split. This is separate from any domestic case that would be filed to figure out paternity, custody, visitation, and support.

Breaking up when you are not married increases the stress and money involved compared to a divorce. During a divorce, a judge will automatically issue an order to stop either party from spending or disposing of any asset or debt of the marriage until the case is resolved. In a civil suit between “business partners” there is no such protection.

If you don’t marry you are forfeiting the social security benefits for yourself. If one partner in an unmarried household dies, the other partner will not receive survivor’s benefits.

The higher income the family unit and the longer the couple has been together without marrying, the bigger loss this is for the surviving spouse because survivor’s benefits are based on the income of the deceased partner during his or her lifetime and length of marriage. This is something folks don’t think about, but death is one bus accident away.

Giving up these benefits is a terrible financial move for the surviving members of the household unit and there’s no way to get around the marriage requirement.  You should get married as soon as possible to protect these benefits!

You are forfeiting social security benefits for your children if you don’t marry. If the father dies and paternity is not established before or very quickly after death, then the government could find that the father didn’t have any children and refuse to pay those children survivor’s benefits.

Even if you can show a DNA test that he is the father or other documents showing that he accepted them as his children, without a marriage certificate, birth certificate or court order showing he is the father, you could easily lose hundreds of dollars a month in benefits for your children.

7. Think of the taxes you will save

You are forfeiting the huge tax benefits of being able to file together as a married couple and claim all your children on a joint tax return. You are losing thousands of dollars in tax benefits by not marrying, including getting to deduct two exemption amounts and various tax deductions. These benefits are even larger when one partner is working and another is not or is making significantly less income.

You don’t need to spend thousands of dollars and hundreds of hours planning a wedding. An afternoon getting a marriage license and recruiting an ordained and registered minister or officer of the court to administer your vows and voila, you are married! You don’t even really have to tell anyone if you don’t want to.

Don’t feel pressured by society to not marry if you can’t afford a big wedding. With the financial benefits of being secretly married, you can save faster for the reception of your dreams later!

9.You can have a pre-nuptial agreement

It is easy and possible to protect yourself in the event of divorce with a pre-nuptial agreement. This avoids a fight over finances in the event of divorce and makes separating much easier and less stressful. Whether you are the high earning partner or the stay at home partner, planning ahead gives you peace of mind and protection no matter what the future holds and allows you to benefit legally and financially from marriage.

10. Be the default decision maker if your partner is incapacitated

If you are married, you are the default decision maker for health and other decisions in the event your partner is incapacitated. If you’re not marred you have no legal relationship and doctors or banks will not listen to you or your wishes at all, even if you own property or have children together. This is a nightmare which is hard and expensive to resolve in the midst of it. Most folks do no estate or life planning. Getting married will solve many, but not all, of the problems created by no estate or life planning.

You cannot inherit from a partner if you’re not married. If you are the stay at home partner, your income earning partner’s assets go to next of kin – children from previous relationship, estranged siblings, elderly parents. You can work and live together for years building a life and nest egg and one quick car crash later and you’re out in the cold with respect to the home, cars, bank accounts, investment accounts. Even if your name is on the deed or account, your non-married partner’s family will inherit his half of the house and other assets. Again, a nightmare to resolve, financially and emotionally, all while dealing with the death of your life partner.

12. Don’t give your Ex an opening to contest the children’s status

Living together without the benefit of marriage can and will cause problems for both of you if you have children from a previous relationship.

Going back to court on anything – visitation issues, a change of custody, or even support issue, will open the door (or the co-habitating could be the reason for going back to court) to arguing over your live-in partner. In Arkansas you almost always will lose this argument, even though society is going toward the direction of more households being unmarried than married.

Don’t put yourself in a position to be in contempt of court or lose custody or visitation of your children. If you love someone enough to move in and have them around your kids, marry him or her!

All in all, the benefits of marriage outweigh the risks of divorce, so our advice is to get married!