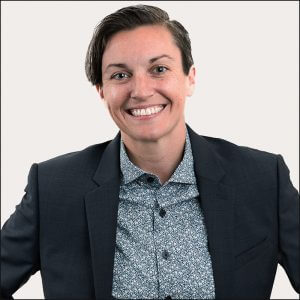 I’m Breean! I’m an of counsel attorney – meaning that I don’t work full time at Lion Legal Services. We work together on a case by case basis, convoluted civil litigation and appellate matters, mostly.

I have extensive experience as an appellate lawyer and trial attorney, handling appeals at both the state and federal level, ranging from general civil litigation (e.g., personal injury, divorce, paternity, etc.) to complex mass torts, products liability, and class actions.

My undergraduate degree is from Cornell, where I was a four-year starter on the women’s basketball team, named as the Ivy League Rookie of the Year (1998-1999), a member of the Red Key Honor Society, named to the All-Ivy Academic Team, and the recipient of the WBCA’s Charles Timothy Stoner Law Scholarship, which is presented annually to one senior, female collegiate women’s basketball player who intends to pursue a legal career.

I kept my impressive academic and extra-curricular pace in law school at the University of Cincinnati where I was a member of the Moot Court Board, an appellate advocacy honors society, an articles editor for the Human Rights Quarterly (a publication widely recognized as a leader in the field of human rights), and selected for membership in the Order of Barristers.

My three year clerkship with the late Associate Justice Donald L. Corbin was the best launching pad to my private practice career. I’m a fantastic trial attorney and spend much of my time briefing and engaging in pre-trial and post-trial motions practice and appeals. I’m licensed in Arkansas, Illinois, the United States Court of Appeals for the Eighth and Ninth Circuits, and the United States District Courts for the Eastern and Western Districts of Arkansas.

While my position is different than that of the other Lion Lawyers, we mesh well and have worked closely on many cases throughout the years. I very much appreciate the down to earth and reasonable attitude of Lion Legal Services!

Outside of the office, I enjoy spending time outdoors, hiking, and exploring our state and national parks. I’m huge sports fan and enjoy playing rugby (although I’m retired from the pitch).