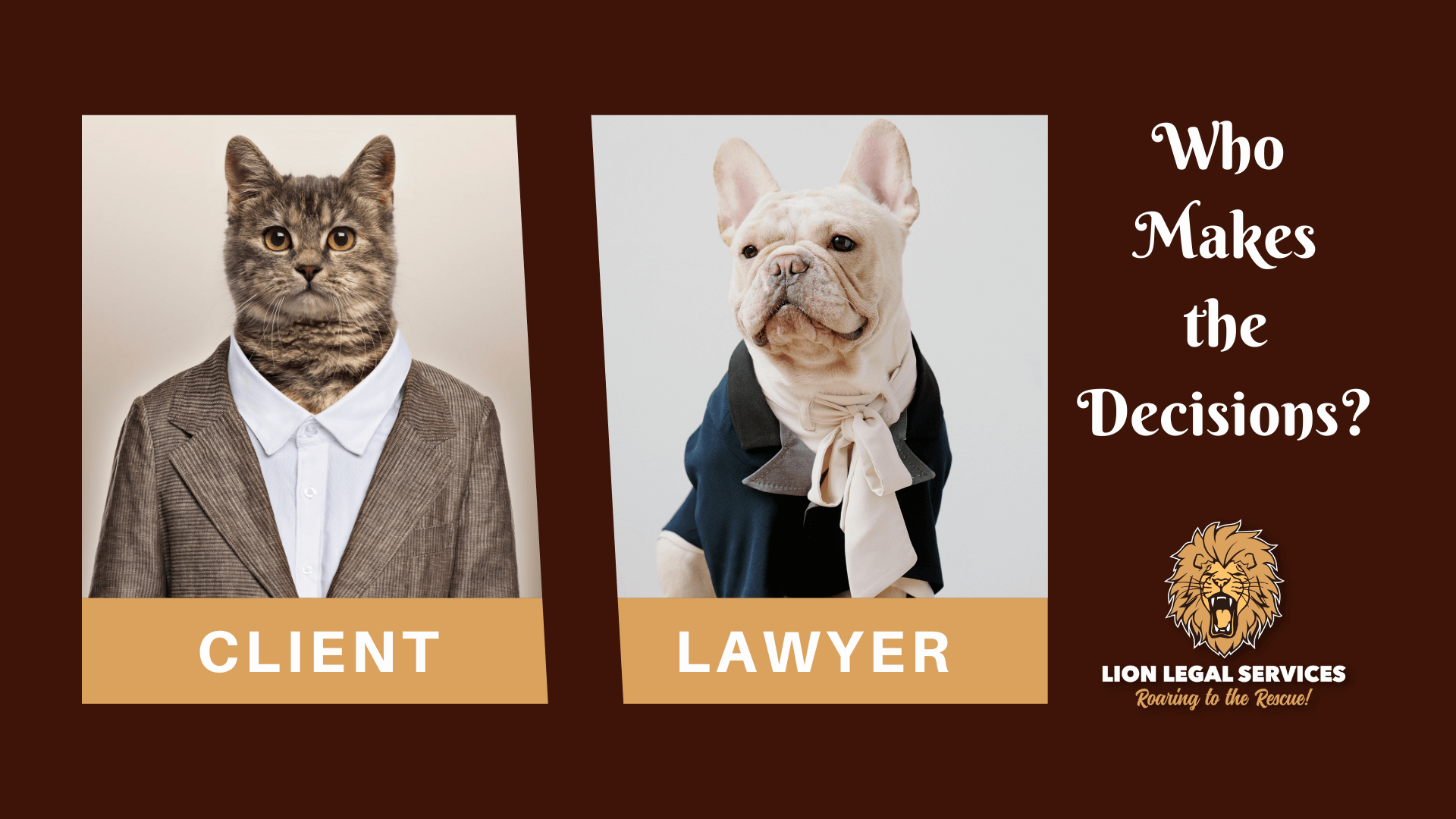 n a lawyer-client relationship, one of the biggest problems that arises is who is the decision maker? In short, it depends.

Who sets the goals, and who decides how to achieve them?

Lawyers are bound by Rules of Professional Conduct. Rule 1.2 governs the scope of representation, and states that although a lawyer’s job is to consult with the client to establish their objectives and goals, it is the lawyer’s decision to decide the means of achieving those goals.

Some decisions, though, are solely at the discretion of the client. For example, it is 100% the client’s decision to settle a matter or not. Although many clients rely on the lawyer’s expertise and knowledge of the situation in making that decision, the decision itself belongs to the client alone.

A lawyer might believe, from experience, that a settlement offer from the opposing side is the best outcome the client will get, and so advise the client to accept the offer. But if the client refuses to accept, the lawyer must abide by the client’s wishes and decline the offer.

The means is how we accomplish those goals. This decision is also determined by the client, for the most part.  A lawyer consults with a client about the means to achieve the client’s goals, but the final decision is that of the client on which option to choose after a thorough cost benefit analysis of each option. Sometimes clients want to pursue a legal route that is not an option; in that instance as described below, it is within the lawyer’s professional conduct to not pursue a legal strategy that has no merit.

Here’s a fact pattern for example: Lawyer is retained to represent client where the client is charged with possession of a controlled substance after his/her car was searched at a traffic stop. The goal of the client is to not get a conviction. The client asserts that police had no right to search client’s car at the traffic stop.

Let’s say that the prosecutor has offered client a plea deal of probation, but the client wants the lawyer to file a Motion to Dismiss and Motion to Suppress, and decline the probation offer.

Many decisions must be made here, so who has final say in these decisions?

Every professional is expected to know how to use the tools of his/her trade. Architects, engineers, doctors, accountants and lawyers are alike in this sense. A patient comes to a doctor with pain in the side, for example, and with the goal of making the pain go away. The doctor deploys the tools of diagnosis to determine what is causing the pain, and treatment to make the pain go away. The patient sets the goals, the doctor decides the means.

In the traffic stop case presented above, given the facts and the client’s goals:

The filing of motions is a decision to be made by the lawyer, not the client, because the judge will be asked to rule on the motions, and the lawyer has to make sure that the motion has a rational, legal basis. Rule 3.1 of the Rules of  Professional Conduct governs the filing of frivolous claims and states that a lawyer shall only file claims where “there is a basis in law and fact.” In all cases, there are court procedures that must be followed, so it is the lawyer’s decision as to whether these motions are frivolous or not.

Other decisions, such as initial time extensions on standard motions are also the decision of the lawyer, not the client. Decisions on professionalism and courtesy to other attorneys are decisions of the attorney.

Even though this is one of the biggest conflicts that arises in lawyer-client relationships, it is easily avoidable with clear communication about the when, what, and why of the legal strategy!