Is My Custody Battle Really An Emergency? 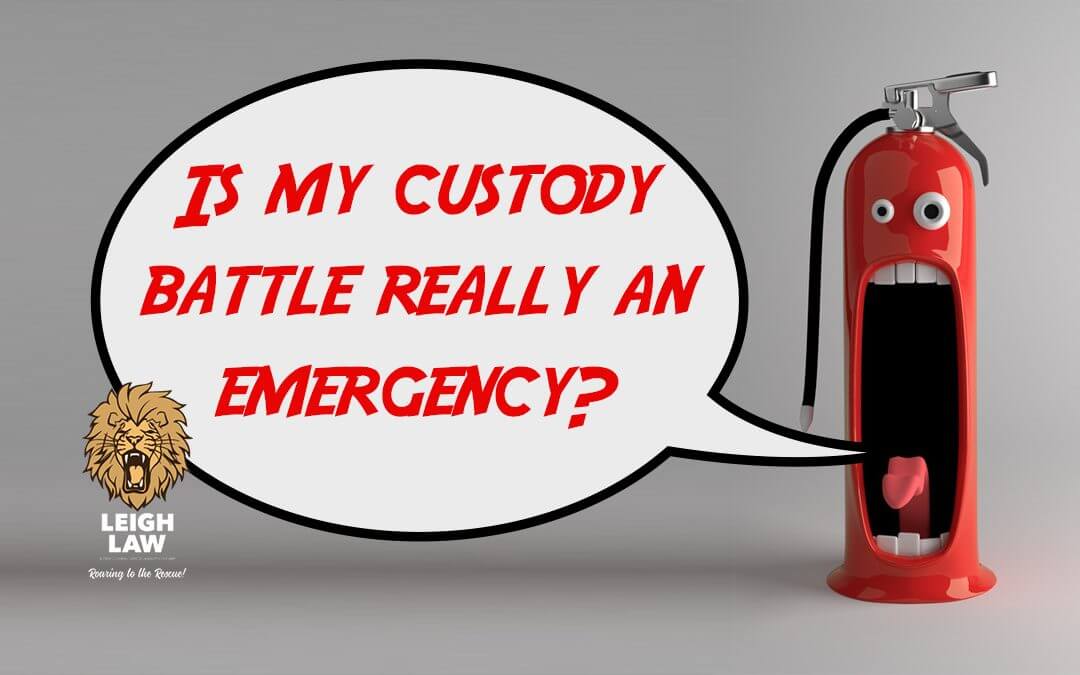 Arguments over custody can quickly get emotional and cause a lot of stress. A hot custody fight certainly feels like an emergency and you want to resolve it right now, of course. For your children and because it’s your job to help protect them. But before you take it to court, it’s wise to ask yourself, “Is my custody battle really an emergency?”

What Will The Judge Think?

There is a fast-track process that the court allows when a situation is a true emergency. As a parent it may always feel like an emergency when it affects your children. But your judge may not agree. And the judge is the one who gets to decide. When considering whether an issue is a real emergency, parents and their lawyers have to put themselves in the shoes of the judge. That’s a tall order for parents caught in the storm of divorce and custody. Part of our job, representing you, is to help guide you through situations like this, with our knowledge of the law and our practical experience of how a judge might respond.

Why Wouldn’t The Judge Agree That It’s An Emergency?

Judges hear thousands of custody and visitation disputes a year. What you are going through is the first time for you, but not for the judge. The judge’s experience has taught him or her that not everything can be an “emergency.” When we look at whether something is an emergency, we have to by guided by what the judge will think after hearing the facts. The opinion of parents is irrelevant! This is shocking to hear for some, but it’s true. The only opinion that matters is the judge’s.

Why Not Just Take It To Court And Let The Judge Decide?

In any litigation, including divorce and custody, the parties need to make sound, reasonable decisions motivated by logic, not emotion. Bringing your emotions to court is likely to alienate the judge, or cause the judge to question every decision you make. You don’t want the judge to think you are too emotional to make rational decisions. In large counties like Pulaski, this is even more true because the “emergency” process tends to be abused here more often. Due to the large population it can take weeks or even months to get a court date on a docket long enough to handle the issue. It is very tempting for parents and lawyers alike to claim it’s an emergency just in order to get in front of a judge faster.

Doing that can be a short-lived victory, though. It may be the fastest way to get to court and also the fastest way to regret it, because it can make the judge very angry! If you and your lawyer decide to allege an emergency just to get quick hearing from the court, or even a court order without a hearing, you’d better be darn sure the judge is going to agree. Even if you get the order you want, when the judge looks at it later and determines that your issue was not a real emergency, that puts your case in a weakened position in the long run. Your side will lose credibility, and losing credibility will affect all decisions the Court makes throughout the case, until the children are eighteen! (And no, unfortunately, you can’t get a new judge just because you made a bad decision and lost credibility with your current judge!)

It’s A Matter Of Rights

Who has rights in this situation? Your side has the right to be heard, and so does the other side. If you do succeed in pushing a judge into making an emergency (ex parte) ruling, he or she will be violating the rights of the other parent. That parent has a right to “notice and opportunity for hearing,” a right which is guaranteed for all citizens in the Constitution. This is a BIG DEAL. So, when a judge makes an emergency determination, the standard must be that the children are in IMMEDIATE and REAL danger, not just potential danger.

The Categories Of Custody Issues

There are three categories of domestic-custody-visitation issues. Most issues fall in category number 1. Litigation is expensive and time consuming. Judges will not get involved in day to day disputes between the parents. Parents are expected to be adults and get along for the benefit of the kids. In many, many cases, there’s just no realistic legal solution, or else the solution is so expensive that the cost doesn’t justify what the likely result will be. Many issues fall in category number 2. These are things like one parent bad-mouthing another, or interfering with visitation, or not paying bills they are ordered to pay, or not paying child support. It might be something such as a girlfriend or boyfriend spending the night at the home when the children are present, or canceling health insurance. These are significant issues that a Court can and will step into. But they are not emergencies and do not justify the Court interfering with the other parents’ constitutional rights just to get a faster hearing. Few issues fall in category number 3. We have to be able to prove to the judge, or at least be able to convince the judge with a reasonable and good faith argument, that the health, safety and welfare of the children are in real danger now.

What CircumstancesWould The Judge Agree Are Emergencies?

We can’t predict 100%, but we do have a lot of experience to draw on. Here are some of the things we’ve seen that the judge took seriously.

Give us a call at Leigh Law to help you figure out what category your issue falls in and what the likely realistic result is under your given set of circumstances! We’d love to Roar to your Rescue!

Case evaluations are completely free; our fees are flat and affordable. Call Leigh Law today at (501) 227-ROAR or Email Us to set up a free consultation.