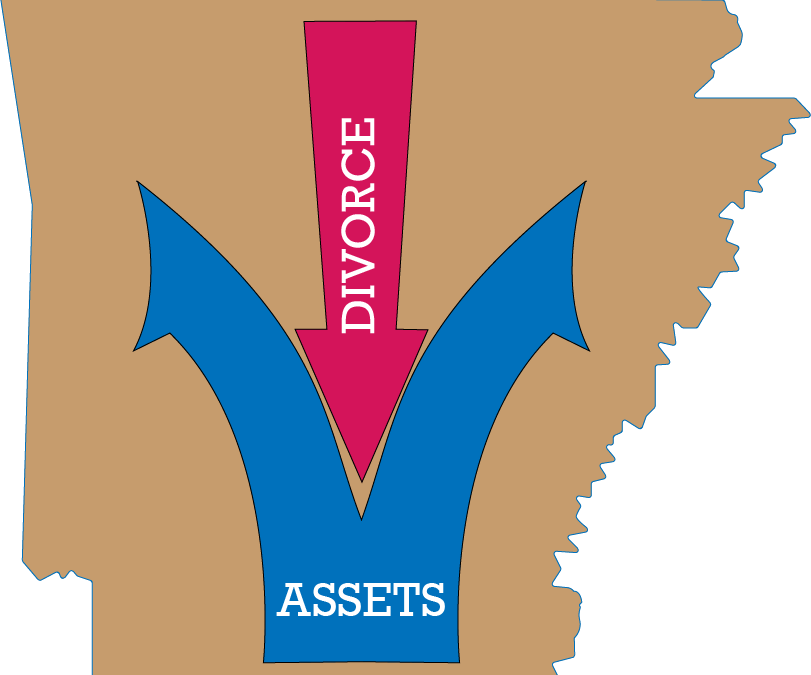 As well-seasoned divorce lawyers, we created a series of blogs for those of you thinking of divorce in Arkansas. For information about Leigh Law’s Family & Domestic Law services, click here. We also answer several of your most common questions on our FAQ page.

This Article is About Asset Division in Arkansas Divorce

What Do We Mean By Assets?

We divide assets into non-tangible things such as bank accounts, retirement accounts, investment accounts, including stocks, bonds, and mutual funds, as well as high value assets such as cars, ATVs, motorcycles, boats, trailers and anything else with a title to indicate ownership. When you’re married, regardless of whose name the asset is in, all assets acquired during the marriage or co-mingled with marital assets are considered marital property, subject to equitable division between the parties. This concept allows a fairness that un-married couples do not enjoy in the break up of their relationships.

How Does Dividing The Assets Work In Real Life?

When both parties are roughly equal income-producers, household contributors, children supporters, and retirement savers, it’s easy to say everyone just keeps what’s in his or her own name. The issues becomes much stickier when one party is the primary income producer and the other party stayed home or didn’t work outside the home to raise the children and otherwise keep the homefires burning. In that situation, the income producer’s assets need to be divided equitably with the non-income producer from a fairness standpoint.

When you first file for divorce, typically a “standing restraining order” is entered which forbids any party from divesting him or herself from assets owned, to prevent having to share the asset with the other party.

Asset division is a global analysis; it is not advisable to divide assets on an asset by asset basis. The goal is for each party to walk away with roughly the same value in assets, not the same number of accounts or cars, for example.

Some asset divisions – such as retirement accounts – require special steps which add cost to the overall expense of a divorce. One of our main goals as your legal representative is to keep the headaches and cost of the divorce down. Leigh Law can help guide an equitable division of assets while also not incurring unnecessary costs and expenses that can mount up when dividing accounts on an asset by asset basis. Retirement accounts have broad tax implications and if the accounts are set up in only one spouse’s name (which is always the case when the accounts are employer sponsored such as SIMPLE IRAs or 401(k) plans), then a Qualified Domestic Relations Order may be necessary. We discuss QDROS here.

In the context of asset division, it is important to consider the reasonableness standard, a concept to which we willdecate a separate blog, which is coming soon. If both parties can stay out of the mud, so to speak, we can divide assets fairly painlessly. We have to consider real property assets in the total division, again a separate blog topic, available here. Bottom line is each of you should receive about 50% of the marital assets to move on with life because in a marriage you each are considered to have contributed 50% to the union, even if your contributions looked differently.

But, What Really Is Reasonable?

There are some factors that may change the analysis of what’s reasonable, and allow us to argue that one spouse should be entitled to more than 50% of the marital assets. These factors include:

What Is A Marital Asset?

Another area that can be hotly contested is whether an asset is considered marital or not!

Sometimes spouses will try tricks to shield assets from equitable division. One fairly common trick is to place assets in someone else’s name (a parent or sibling, perhaps) so they can argue that it is not their asset at all and therefor not subject to consideration in the division of assets.

Dividing assets is complicated and there are no bright line rules to simplify it. Having a great attorney on your side roaring to the rescue is critical in obtaining a positive and fair result for yourself in a divorce.

When preparing for your first meeting, you should make a detailed list of all assets of both parties of the marriage without regard to whose name that the asset is in, or even if it’s in the name of one of the spouses!

Case evaluations are completely free; our fees are flat and affordable. Call Leigh Law today at (501) 227-ROAR or Email Us to ensure that you are making wise decisions now which will last far beyond the entry of the divorce decree.