What To Do If Pulled Over For DWI 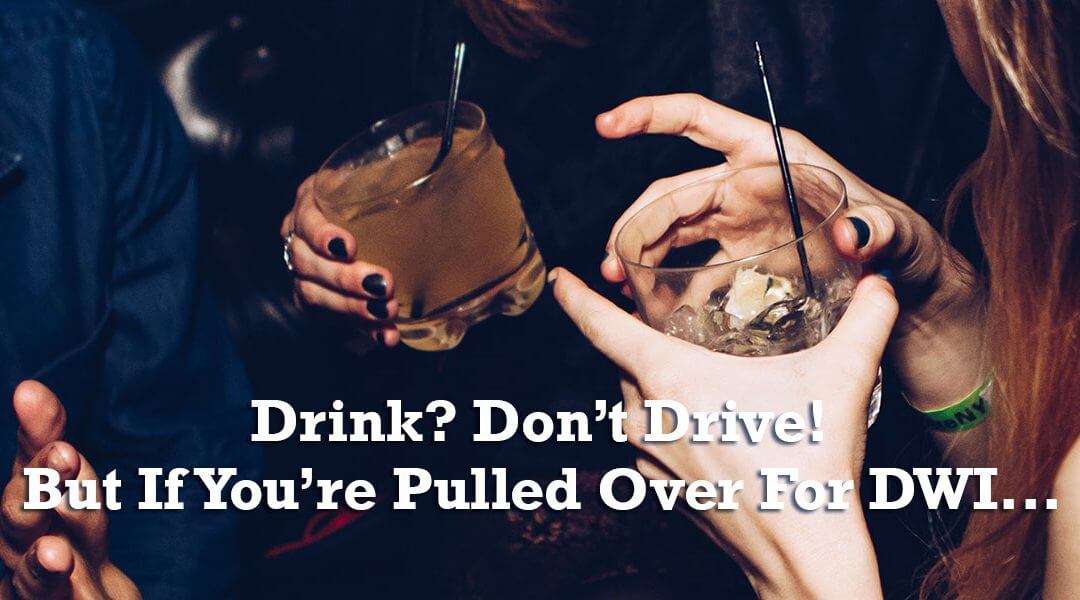 First of All: Never Drink & Drive!

It goes without saying that no one should ever drink and drive, but we’ve all made decisions we regret. If you find yourself in this situation, you should remember this: Remain calm and polite. Don’t be rude to the officers or engage in a verbal altercation with them. Never be combative or aggressive and remember that everything is recorded, so a judge or jury is going to be watching your every move. You want to be appear cooperative, not belligerent (read: drunk)

Whatever you do, never admit to drinking. Never admit anything – not that you’ve been drinking at all or “just had one beer.” Or was drinking but it was hours ago.

Field Sobriety Tests: Must I Participate?

You do not HAVE to participate in the Field Sobriety Tests. If you think you can complete the tasks relatively well and appear sober on the camera, then you should take the tests. If you cannot, then don’t. If you’ve had anything to drink at all, you probably shouldn’t take them. FSTs are typically recorded by a dash cam, so you should think about what a jury or judge would think if they saw the video. Don’t be surprised when the officer says you failed the FSTs – it’s very difficult to pass them, even sober. They are designed for failing. Part of defense at trial would be to attack the design of the FSTs and how even sober people fail frequently (so they are not proof beyond a reasonable doubt of impaired driving).

The law does not allow for any negotiating on an arrest for a drunk driving charge, so you will likely be choosing between pleading to a DWI conviction OR going to trial on the issue of whether you were drunk driving.

Should I Refuse The Blood Alcohol Test?

The law says that if your blood alcohol content is above .08, then it is legally presumed that you are impaired and a danger to yourself or others. If you are sure that you will test higher than .08, you should refuse to take the blood alcohol test. You will be charged with refusal to take the test, but that is better than giving them evidence to convict you of DWI.

Driving is a privilege, not a right, so if you refuse to test the breath test or an alternative blood test then you will automatically lose your driver’s license for six months and be charged with “refusal to submit to chemical testing” but, refusing the test makes proving the DWI much more difficult. You will work with Driver Control to have limited driving privileges and you will have to have an interlock device installed on your car for a period of time.

If you don’t test or you test below .08, then you could still be charged with DWI. The question is whether the police can prove by other evidence (your comments, admissions, appearances, performance on field sobriety tests) if you are a danger to yourself or others.

Never Give A Statement, Call Your Lawyer Instead!

If you’re arrested, your car will be impounded, unless the officer allows you to call a family member to come get it. Never give a statement to the police, ask for your lawyers – us!

You’ll likely be released on your own recognizance (especially, if it’s your first arrest). There are lots of procedures and processes that must be followed by law enforcement to result in a conviction. Let us review your file to ensure they did everything right (often they don’t!). Call immediately for us to Roar to your Rescue!